1. Monitor the varroa level
Do it at least one, probably two, three (or maybe sometimes more) times per season (when there is a normal amount of brood in the colony). If varroa level is higher than 3% (more than 9 mites from 1 dl of bees) – treat at the latest a week after the monitoring was made.

The first monitoring of the season in spring is usually the most important. If it gives 2-3% varroa level, monitor again within 4 weeks. 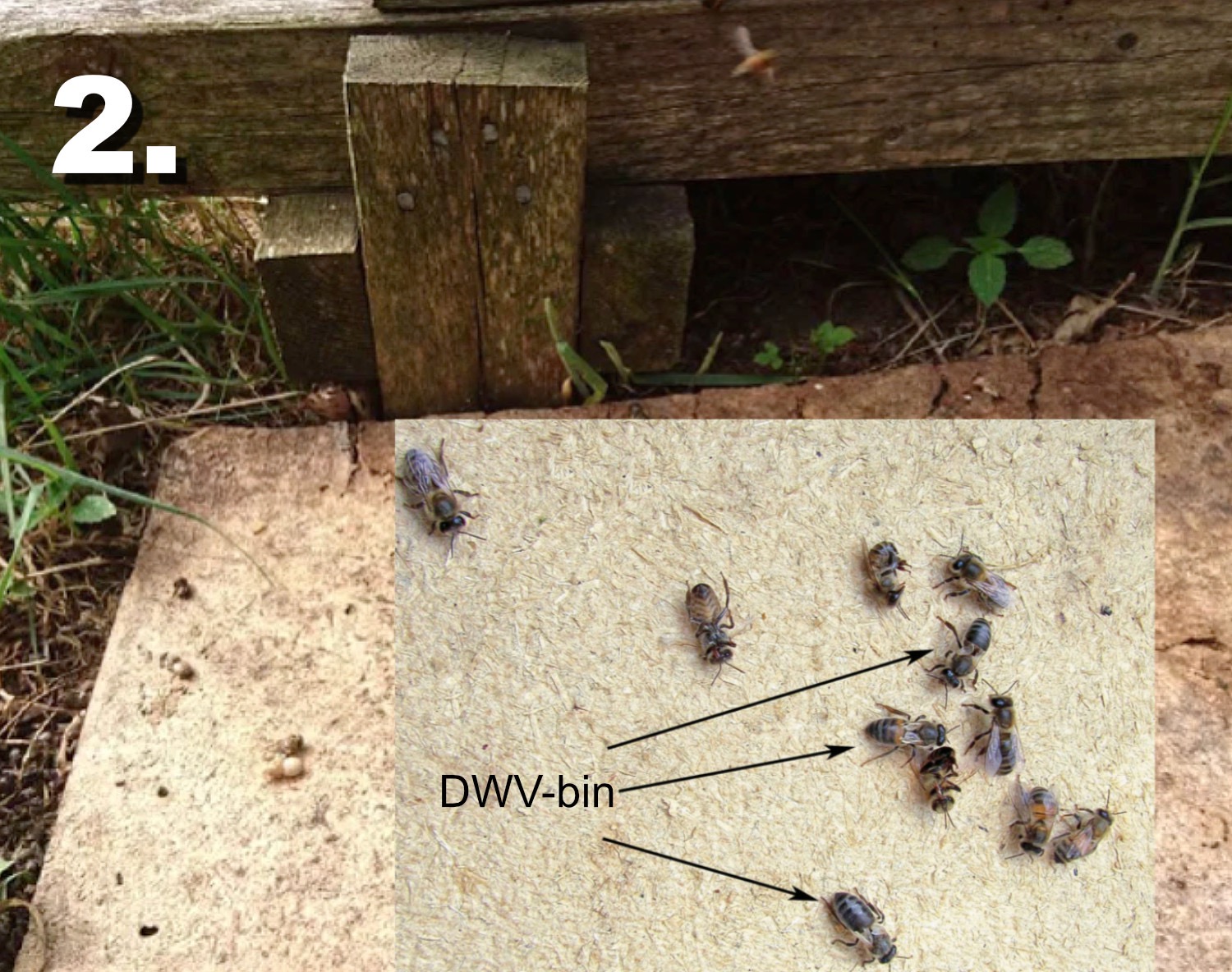 2. Use a hard board 0.5 x 0.5 m (0.5 x 0.5 yard) in front of the entrance
Inspect the hard board regularly, once a week if possible. If you don't see much there, that's a good sign. Look primarily for DWV bees. You recognize them on the crippled wings. DWV (Deformed Wing Virus) is the virus primarily associated with varroa. You may also see whole white pupae, but also parts of pupae. This can indicate cleaning behavior towards varroa mites in the capped brood.

• If you see one DWV-bee – consider checking the varroa level.

• If you spot more than one DWV-bee – monitor the varroa level is a good choice.

• If you find three or more DWV-bees – consider treating with thymol pads right away. 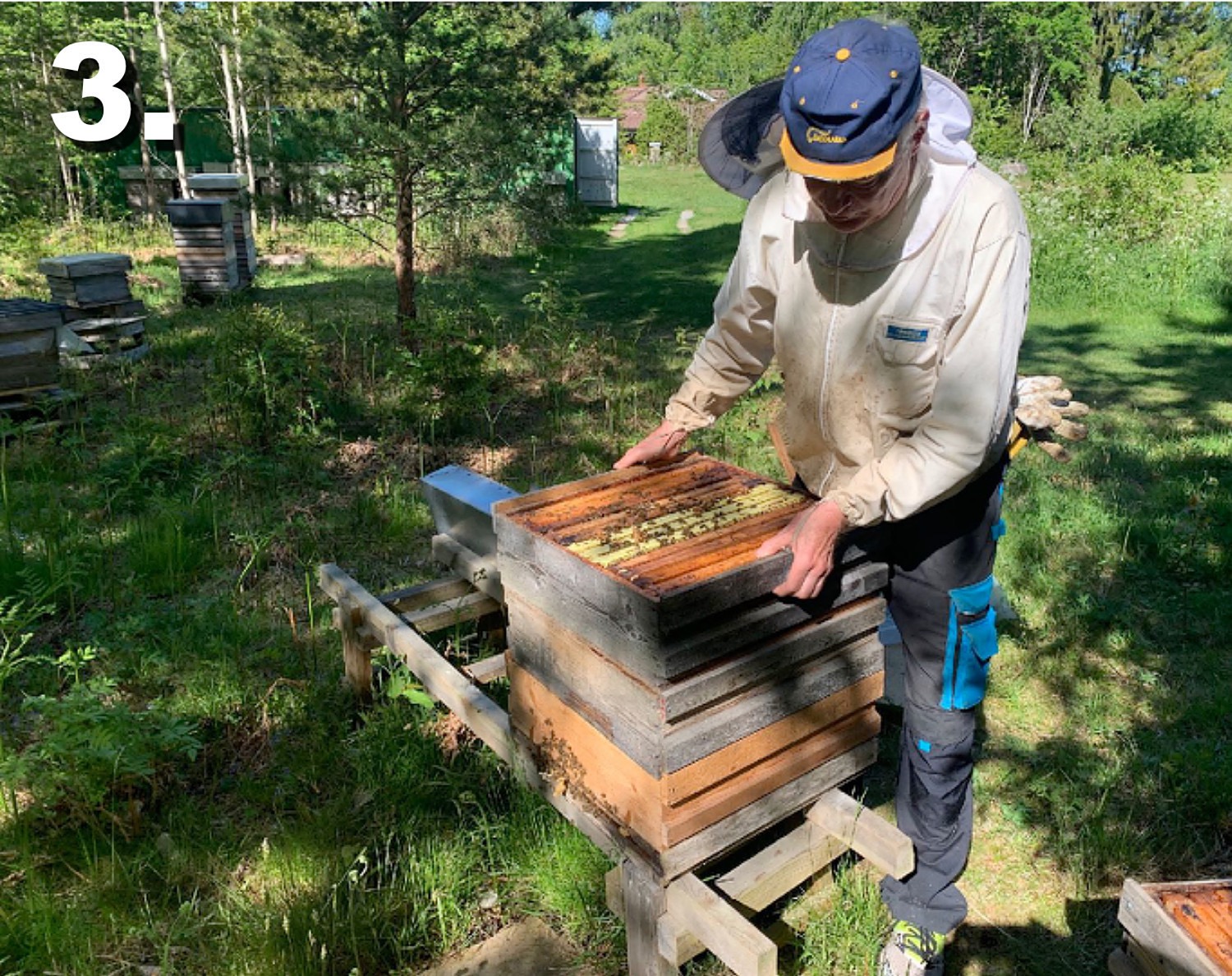 3. Check how the colony develops
Does it develop as you expect it to do? Was it almost time for another super last time you looked?

• Has the bee population not increased or increased just a little since last time you checked and it's early in the season? It's time to look in the brood nest. There may be brood, virus or varroa disorder.

• Is the top super full to ¾? Time for another super. I always put them on top.

• Is the top box crowded with bees. It's absolutely time for one or more supers. It's maybe wise to look for queen cells and be prepared to make a split with the queen. Maybe two splits.
4a. You find area(s) with dense capped brood 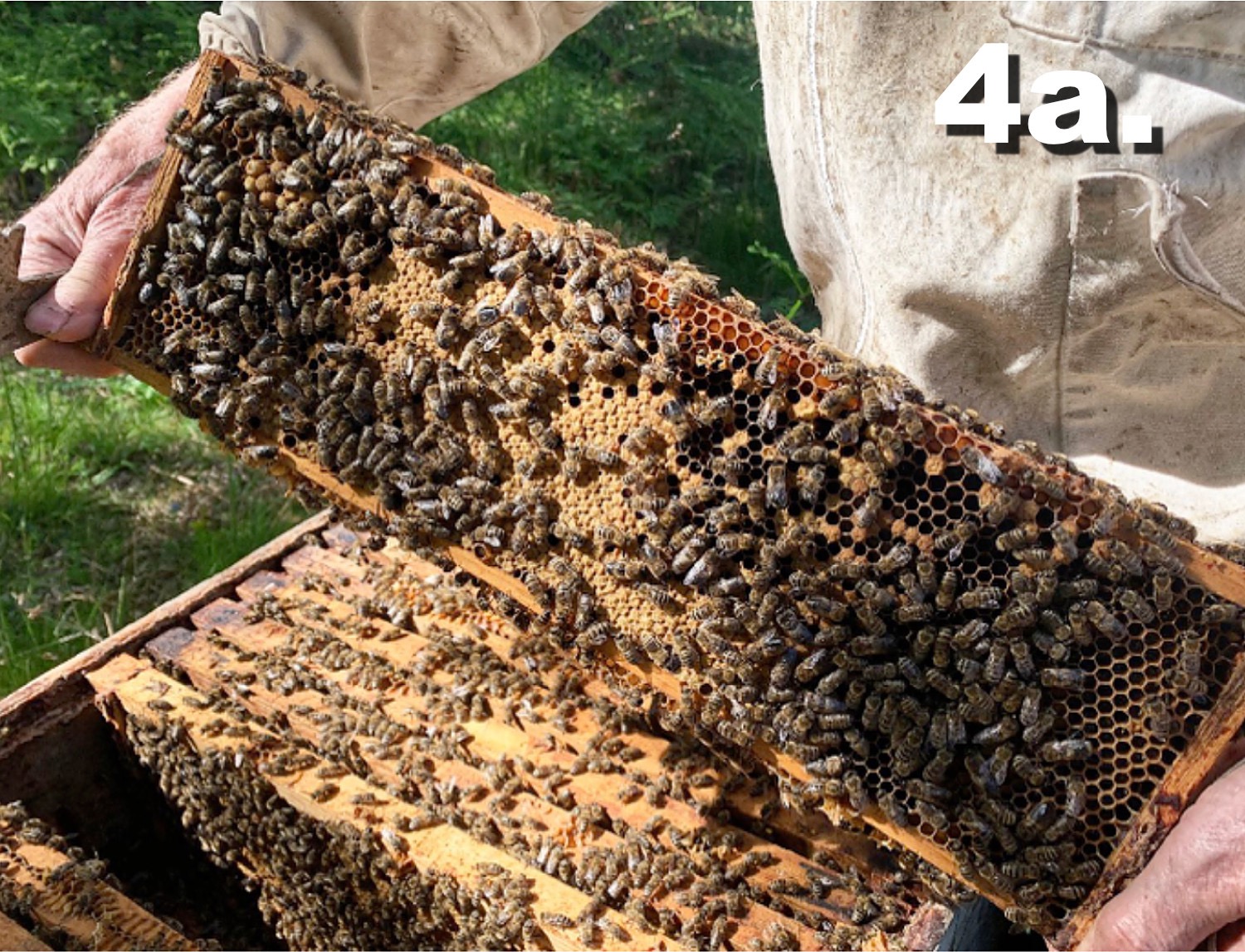 4a. Do you find areas (at least a couple of square decimeter, 15 square inch) with just a few open cells without capped brood on at least one or two brood combs? In that area most cells contain capped brood. This is a positive sign.

• It means that after a short period of time a lot of new bees will hatch and the population increase. This is important for all the tasks that need to be done in a bee colony. 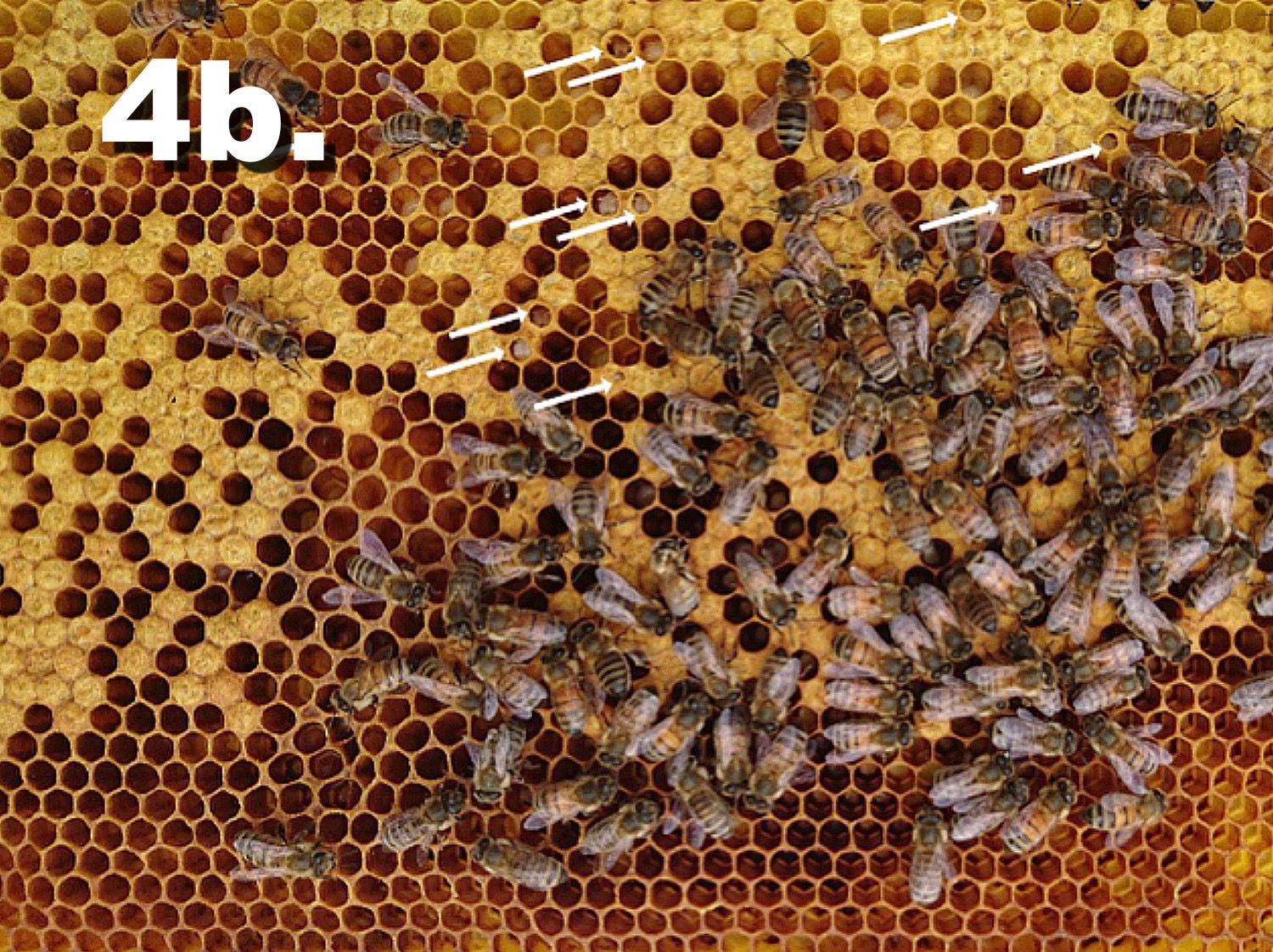 • It means that there will be fewer bees to hatch that can replace the bees that are becoming worn out. The bee population may decrease. In late summer/autumn this is especially negative and can result in too small winter cluster to overwinter.

• It may mean that the bees weren't triggered to start removing mites from the brood until the varroa population was too big. The viruses may have increased a lot.

The colony may have other brood problems, like chalk brood, sac brood, EFB or AFB. This brood appearance may also be due to inbreeding, but that's seldom the case, if you don't have highly inbred colonies from using instrumental insemination.

Also the colony may have achieved a big varroa population through reinvasion. Bees from the colony may have robbed other colonies within 2 km (1.5 miles) during a nectar dearth. Colonies that have reduced defense due to a irritating high varroa population. They may also have a big entrance that makes it difficult to defend. The robbing may not be evident. It can be so called silent or slow because a reduced defense capability. A reduced defense capability can be hereditary impaired or due to disharmony of the colony. This bad harmony can be due to for example queen problem or varroa and virus problems.
The colony can also have received drifted bees with mites on them. It can have problems defending itself just because it's a small colony with a too big entrance.

• In any case this holed appearance is a good reason to replace the queen even if the varroa level is low. The youtube colony:
https://www.youtube.com/watch?v=oR3oX5Rjlj0
had 0% varroa level and this brood appearance. It ended up with a small winter cluster the winter that followed and died.
The base for decision
The four guidelines provide a good basis for decision-making. Remind yourself often of these guidelines so that they are relevant to you when you visit an apiary and work with the bees.
All beekeepers can do it!
Whether you live in an area with many beekeepers or not and maybe different kinds of attitude to treating against mites and develop resistant bees, you will strengthen the resistance of the bees in the area. The same applies to if you have few hives or many.

You can always try to set aside a few apiaries situated as good as possible for the task of achieving resistance. Later on you can spread good bees to more apiaries.

If you have only few bee colonies in a difficult surrounding, you can also try to find an apiary not too far away, more isolated from other bees where it will be easier to develop resistance.

If you start with bees that have advanced somewhat on the road to resistance it will probably go quicker.

To receive resistance traits that are best suited to your circumstances you let et your new queens mate in your area where you follow these four guidelines. At the same time your bees will be well adapted to the special circumstances in your area.
Improving the bees
• Replace the queens in inferior 30-50% of the colonies.

• Identify the colonies that have had the lowest varroa level the longest. Make appropriate notes.

• Which colonies seem to fight the mites the best?

• Choose the best colonies concerning varroa that have at least a crop above average and a good temper. Breed daughters from them.

• Remove the queens from the inferior 30-50% of the colonies. After a week destroy the queen cells in them and give them a mature queen pupa. Fill an extra 10-30% queen mating nucs of your number of colonies.

• If you have 10 colonies, remove the inferior 5 queens. Fill maybe three mating nucs with bees and a queen cell. Place them for mating in a place with many good drones.

• Make splits from colonies that have a good enough low varroa level compared to average and have a good temper and crop. Let the splits make their own queen. After a week destroy all queens cells but one or two that sit very close (to avoid a swarm).

• If you work with only one apiary let the queen follow the split you move to another place in the same apiary. Field bees are also needed to make good queen cells.

• If you work with more than one apiary, move the splits to another than the apiary of the mother colony.
You set up more new colonies than you plan to winter, because all queens will not succeed in mating. When the queen is mated I want the split to always have fondant to help her egglaying to be good. The new colony will need the resulting bee population for wintering to be as good as possible.
To the top of the page
Saitmap
Home
Updates in red, March -21
BEEKEEPING
With Elgon bees
Making of a beekeeper
One year with the bees
VARROA
Varroa war
My first 12 years
Ohlsson in Finland
Why resistance
CELLSIZE
Cellsize history
Norwegian test
Test design
GRADUAL RESISTANCE
Thymol pads
Monitoring Varroa
Resistance help
Guidelines
© Erik Österlund
2016 - March 2021