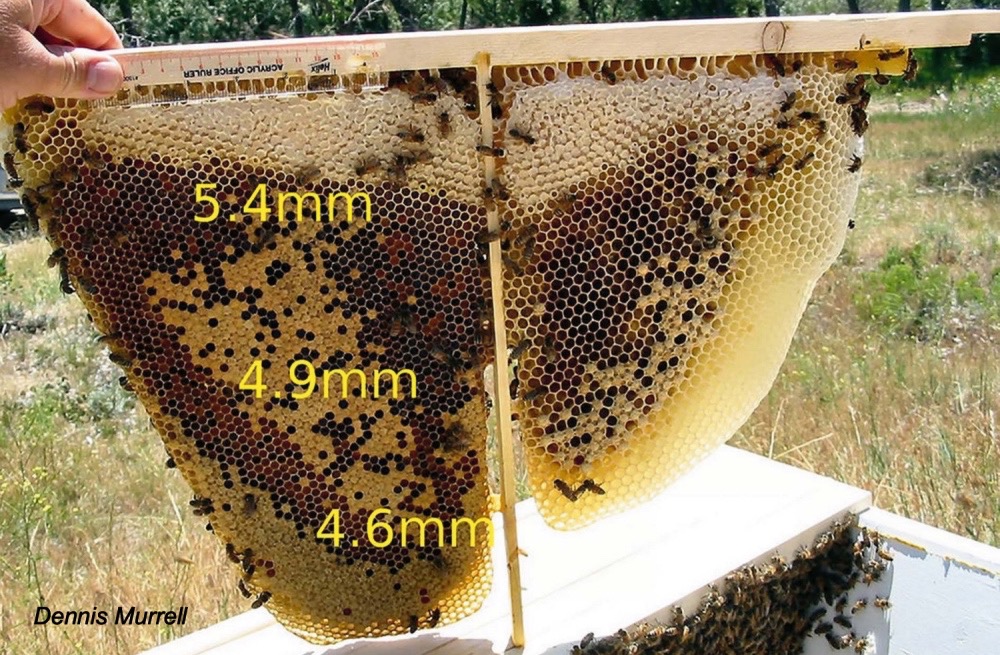 Cellsize history
The first commercially wax foundation, in USA 1876, produced by A.I. Root, had imprints for 5 cells per inch for worker cells, a little less than 5.1 mm cell size. That was said to be an average of cell sizes found in a bee colony.[1]

Nowhere in the bee literature you could find notes that smaller sizes mostly were used for brood and larger mostly for honey storage. It seems this fact was not discussed. That means that you can't be sure how well the measurements are made that constitute the base for figures of cell sizes in the bee literature, even up to our days.

To be sure to what extent you can trust figures given you need information how many and where in the nest samples are taken. Best is to get the range, smallest and biggest sizes found, as well. And after wax foundation had been common you need to know if the combs are built with foundation or not.

If the measurements are taken from combs built without wax foundation, you need to know if the bees have come from a beekeepers hive or from feral bees since several generations (with new built brood combs without foundation every year or so). Today feral bees that have lived more than a few years as ferals are the only really trustworthy to get an idea of the natural cell sizes.

In the beginning of the 20th century in USA beekeepers many times found that bees did a better job drawing foundation with somewhat larger cell size, about 5.2 mm. That's easy understood as foundation mostly were drawn in the honey supers when the honey flow was good. Under such conditions bees want bigger cell sizes, honey storage cells. Brood sized cells they draw best in the broodnest early in the season before a strong honeyflow. And those smaller bees before the time of foundation that were born in smaller cell sizes than the average of 5.1 mm were now no longer born and could not help to build smaller cells.[2]
Wax foundation
When beekeepers began to experiment making wax foundation, they had to decide which size of the cell imprints they should use. Of course measurements took place. Evidently they found different sizes as the first molds and mills for foundation differed quite a lot concerning cell size.
Some kind of reasoning must have taken place before they decided which sizes to use.
With bigger sizes it was easier to extract the honey and less wax was used by the bees, thus they were quicker built as well. Probably one of the reasons bees themselves want bigger sizes in the honey storage area when there's a strong flow.

When large sizes were used in the brood area the bees got bigger and their honey stomach as well. Many thought that such bees must be able to collect more honey. But there is no good designed test with many colonies over more than one season that give advantages for bigger bees. But many express their belief in bigger honey yields in the old literature. The arguments are longer tounges and bigger honey stomachs with enlarged bees. Roy Grout in USA saw no difference.[3]

The Belgian beekeeper Usmar Baudoux has been best known for working for an enlargement of the cell size to 5.7 mm. The only argument he gives for a better honey yield is an invitation for beekeepers to come and see his bees.[4]

Constantin Antonescu from Romania experimented in 1954-1958 with a few colonies on two different enlarged cell sizes, 5.4 and 5.65 mm, and meant that he could show a bigger honey yield from the largest cell size. But the information about the test is not sufficient.[5]

Those that wanted small sizes did so because they thought it was better to get as many bees as possible from a given comb area. In Belgium 5.0 mm was introduced in 1891[6] and well accepted. Baudoux reacted against this and worked for enlarging the cell size.

In Switzerland there was even a mold made with cell size 4.55 mm.[7] In 1857 Johannes Mehring made a mold with cell size 5.55 mm.[8]
Natural cellsizes
To find out which cell sizes are natural for Apis mellifera it would be best to be able to find good data before wax foundation became common. And the data should include many measurements giving a range of cell sizes. The best would also be to know if the samples were taken from different parts of the nest, from the core of the brood nest and from the outer frames.

From where in the nest samples have been taken I have not been able to find any notes of. But there are good presentations of data by Jeffries Wyman (1866) and Thomas Cowan (1890). Also there are some interesting observations given in a paper by Hugo Gontarski (1935).
Jeffries Wyman, Professor of Anatomy at Harvard College 1847-1874. (Photo: Wikipedia) 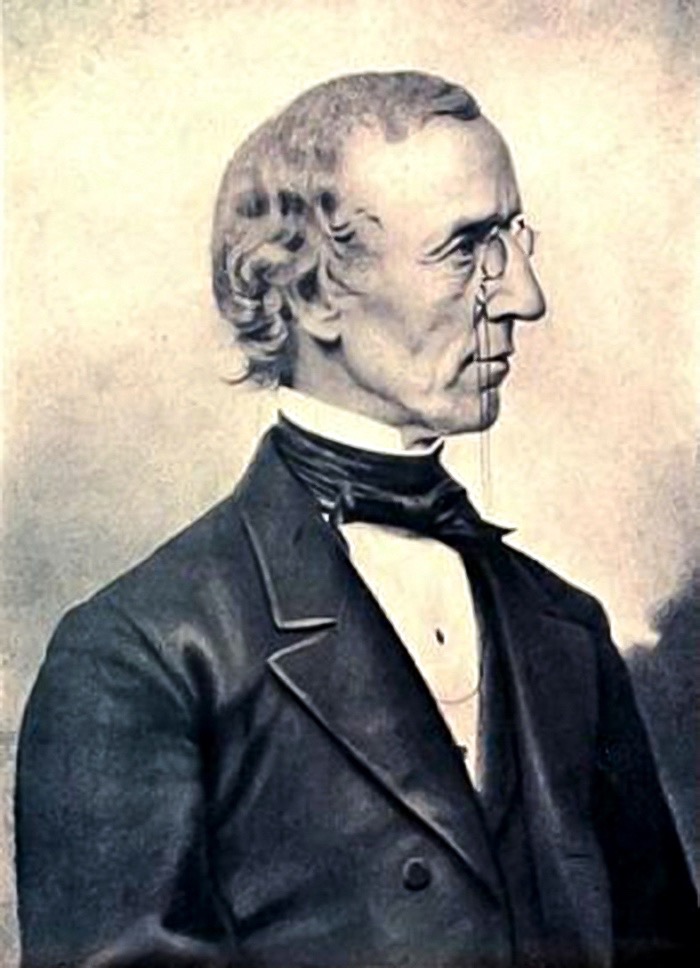 Jeffries Wyman
Jeffries Wyman was Hersey Professor of Anatomy at Harvard College (1847-1874), president of the American Association for the Advancement of Science (AAAS) in 1858. He wrote 70 scientific papers and was well respected by fellow scientists on both sides of the Atlantic.
Wyman reacted on the claims of Maraldi, Lord Brougham, Koenig and other mathematicians that the cells of the bees were perfect, made in accordance to theoretical perfect execution in terms of material consumption and strength.

One irregularity is the different cell sizes. He first states that the average size is one fifth of an inch [5.08 mm]. The same says Reaumur and Huber, even if their inch, the French, is about 5% bigger [5.33 mm]. But they don't present any measurements like Wyman does. 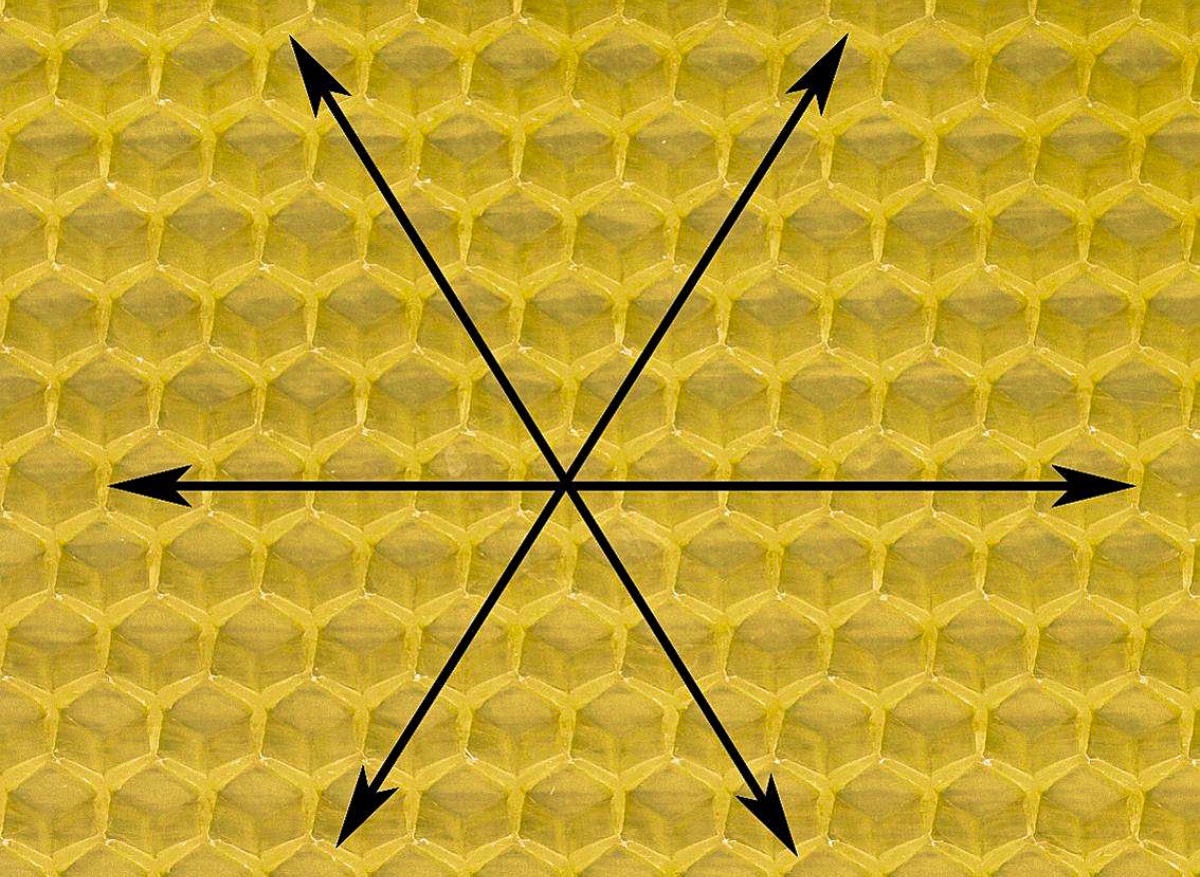 Three such measurements with three parts were done on each of the four combs.

The average of all measurement parts (36) is 2.01 inch (5.11 mm for one cell).
I din't know of the sizes Wymann found until some years ago. Wymann is cited sometimes, but not his findings very often. Why? He is after all a very well merited scientist. His measurements are the best done before the times of wax foundation, the most trustworthy because of the way he did them.
Thomas W. Cowan
Cowan founded the Beekeepers' Association in Great Britain with Charles Nash Abbott in 1874. He designed the cylindrical honey extractor. He was the editor of the British Bee Journal and the Bee Keepers' Record. Cowan authored books on beekeeping and related topics and was a collector of beekeeping books.

In 1890 he published the book "The Honey Bee: Its Natural History, Anatomy, And Physiology".[10] On pages 179-182 he deals with the sizes of cells, citing also Jeffries Wyman. Cowan had examined combs from black bees in England, Italian bees in Italy and of Carniolian bees in Switzerland, also of various bees in Canada and USA.

The summary is an average of 5 worker cells to the inch.
He made a test similar to that of Jeffries Wyman with a total of 36 measurements as Wyman did. His least average of ten cells was 1.86 inch (4.72 mm for one cell). His biggest average was 2.11 inch (5.36 mm for one cell). He also found that "…, generally speaking, the cells increase in size towards the ends [of a comb], although this is not invariably the case".
Hugo Gontarski
Hugo Gontarski was the first leader of Das Institut für Bienenkunde in Oberursel, Germany, 1938, where he started a lot of reaserch. In 1935 he published a paper about cellsizes in Journal of Comparative Physiology,[11] – "Wabenzellmasze bei Apis Mellifica."

He wanted to see how bees built combs without the help of wax foundation. So he made new colonies with frames without foundation. The bees came from colonies with combs built with foundation with cell size 5.44 mm, 5.68 mm and 5.74 mm respectively. 5.44 Gontarski called normal foundation.

"In all cases though were the newly built worker cells smaller than the brood cells in which the bees who built them were born." (page 686)

This is also the experience of beekeepers today that want to take down their bees in cell size. After a couple of months all combs can be taken away from the bees again and only empty frames without foundation given. Once again the bees will build smaller cell size – and again and again, until they reach the sizes of their genetic disposition.

Gontarski also tried some foundation with very large cell size and some with 4.71 mm cell size, to test the limits of the plasticity of the bee's ability to build different sizes of cells. (Actually it is not possible to find out that in one step like he did here.)

An interesting fact is that his bees born in 5.44 mm cells drew 4.71 mm cell size nicely. There's a photo of such a comb on page 693. That would be very rare among European bees today. The genetic disposition for cell sizes in his bees must therefore have been for smaller cell sizes than what is common in Europe today.
Noter och Referenser
1. Root, A.I., ABC of Bee Culture, 2nd edition, 1884, page 146: "The worker-comb measures very nearly five cells to the inch, ON AN AVERAGE [emphasis added]. … The best specimens of true worker-comb, generally contain 5 cells within the space of an inch, and therefore this measure has been adopted for the comb foundation. (Comment 38 at the end of the book, comments made by G.M. Doolittle in 1880 to the first edition of this book reads: MAKING USE OF LARGE CELLS. We tried to so improve the bee as to make them take cells 4½ to the inch [5.64mm], but we had to give it up, and believe God knew best when he taught them that five is right.

3. Grout, Roy A., Influence of Size of Brood Cell Upon the Size of the Worker Bee, American Bee Journal, April 1936: "… we must consider the fact that the crucial test for the commercial use of enlarged foundation is greater honey production. While this experiment should be a strong indication toward that end, the exact relation of this increase in the size of the adult worker bees to a greater yield of honey has yet to be proved. During the past four years, we have been conducting an experiment in a commercial yard with from fifteen to twenty colonies containing brood combs constructed from each size of foundation [5.2mm, 5.5mm and 5.7mm], making an apiary of sixty colonies maximum. To date we have not been able to find any significant increase in the honey production due to usage of enlarged cell foundation."

5. Antonescue, The Efficiency of the Use of Enlarged Cells, XX Jubilee Apimondia Congress, August, 1965, pp. 675-677. The variation of figures for the different colonies were not presented, just averages, so no statistical significance could be calculated. The strenght of the different colonies were not presented. No info of the heritage of the queens in the colonies were given, with so few colonies a group of sisters is a must. The text is online here:
http://resistantbees.com/blog/?page_id=1254
6. Baudoux, U., The Influence of Cell Size, The Bee World, Vol. XIV, no 4, April 1933, p 38: "About 1891, foundatin with cells 920 to the sq. Dm. [5.0 mm] was introduced into our country. Beekeepers all adopted this size of cell. The experts of that time believed that it was advantageous to produce as many bees as possible on the least possible surface of comb." My calculations to mm translations are made with the formula: X=100÷√(A÷2.315), where X=cellsize in mm and A=cells/dm2. Control the formula with: A=23150÷X2